Superconductors are materials that completely lose their electrical resistance when cooled to very low temperatures. As early as 1911, materials were recorded that show these phenomena. The critical temperature below which the effect occurs is only slightly above absolute zero for these materials, requiring liquid helium for cooling (temperature: -269 °C).

Superconductivity can generate extremely high magnetic fields. These are e.g. needed in medicine, in research, or in nuclear fusion. Because of the expensive helium cooling, the possible applications are limited. A helium supply for these applications is part of the delivery program of Messer.

In 1986, scientists Georg Bednorz and Alexander Müller discovered materials with critical temperature near the boiling point of liquid nitrogen (-196 °C), and were awarded the Nobel Prize for Physics in 1987. Because these so-called high-temperature superconductors (HTSC) can be cooled with liquid nitrogen, there is a large range of applications for superconductivity, for example in current limiters, electric motors and generators.

A new application for these materials is the lossless transmission of electrical energy through power cables. It is a great advantage, especially in large cities and industrial areas, since the laying of conventional copper cable often leads to difficulties because of the large space requirement. In addition, the HTSC cables do not generate magnetic fields, which further simplifies installation. Because of the high current carrying capacity, it is also possible to transport large amounts of energy at a lower voltage. This can save substations and avoid electrical losses of the transformers.

Further fields of application are the power supply of electrolysis cells in the chemical industry or in the aluminum production as well as high current connections of electronic data spokes. 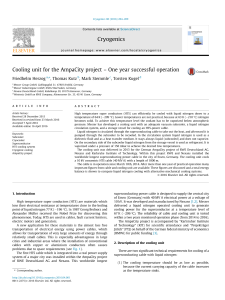